Inner Mongolia was founded in 1947.It is an autonomous region in the far north of China, bordering Mongolia. It is part of a beautiful grassland region that covers much of East Asia. This fertile flat and open land, with lofty mountains and deep lakes, is a place where temperatures vary from -30 degree in the winter, to +40 degree in the Summer months. 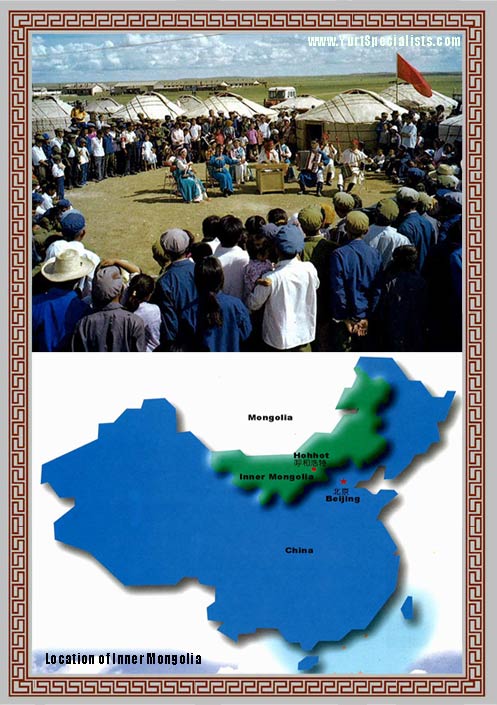 It has a history dating back tens of thousands of years and legend says it was the birthplace of far East civilization. People of this region have lived in yurts for much of this time, as they are ideally suited to these regions with extremes of temperature and powerful winds. Their yurts were designed to be easy to take down and move, which is perfectly suited to the Mongols nomadic lifestyle. The region of Inner Mongolia was part of the Warrior leader Ghengis Khans homeland. In the 13th/14th century, he united the nomadic tribes of the grasslands and created a fierce army that conquered lands as far away as Turkey. Today, Ghengis Khans mausoleum can be found in Erdos City, Inner Mongolia. Our business is based in the northern Inner Mongolian City of Hohhot, a grassland area known for its ‘Dayao’ and ‘Hetao’ minorities, whose lineage directly traces back to the Mongol leader. This vibrant city is an eastern mix of old and new worlds. A place where values and traditions still hold strong, despite the ever-increasing effects of a rapidly globalized planet. In keeping with the traditional ways, all our yurts are made to the exact design that the local nomads have used for a millennium, with a few improvements to enable them to adopt various weather conditions.